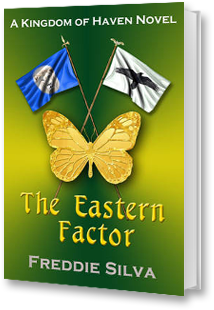 After being shattered by the death of his lady love, Olaf is sent east by his namesake Uncle to recover in the relative safety of the Eastern Confederation. Even here, he cannot rest. The Empire of Jewel is marching against his uncle’s fledgling Kingdom of Haven, and Olaf is tasked with finding a way to aid his uncle.

Suffering from his own internal demons of self-doubt and grief, he attacks his mission with as much gusto as he can manage, but has he learned from his previous mistakes? In order to succeed, he must form odd alliances and thread the needle of daunting Eastern politics. Has he learned enough to recognize friends from enemies, and, above all, keep his own dark impulses from destroying his efforts?

The fate of the Kingdom of Haven is depending upon his success.

Coming of age is tougher when you’re a Stenson.